Skip to content
Walking The Talk
The building that now houses SSCAFCA was dedicated in December of 2002, twelve and a half years after the first official meeting of the Board. It sits on 2.7acres of land at the southern edge of Sandoval County. The opportunity to build a new headquarters building also offered SSCAFCA the opportunity to demonstrate in practice the principles of our mission, so that the building and its site could serve as a living laboratory and concrete demonstration of best practices. We began with a vision of how to illustrate the principles of our mission, and sought the best techniques to implement that vision in accordance with those principles. 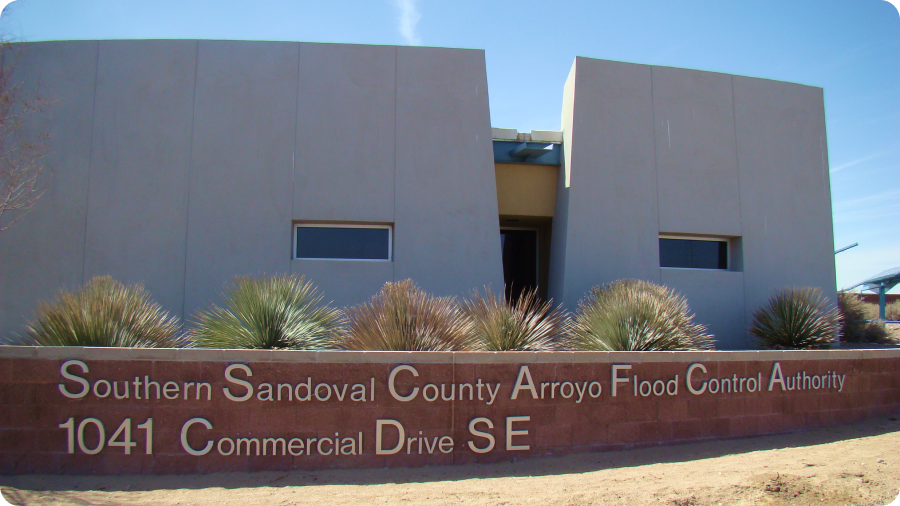 It all began with a site. The site is typical of many building sites within the boundaries of SSCAFCA: sparsely covered with native vegetation, susceptible to erosion from runoff, with gentle variations in topography.

After an exhaustive selection process, the firm of Environmental Dynamics, Inc., which specializes in environmentally sensitive integrated sustainable design and development was selected. As the parties explored each other’s philosophies and discussed SSCAFCA’s programmatic needs, they began to see parallels between the flow of people, information and water.

The first conceptual sketch articulated a vision of people flowing like water through corridors that wind between smoothly rounded masses whose curves create eddying pools and rushing channels as they widen and narrow. The design became a metaphor for the movement of water through an arroyo and the landforms associated with water drainage. The placement of the elements and the shape of the flow followed the contours of the site and the building was sited to capture the spectacular views of the mountains and the Rio Grande, while taking advantage of solar exposure. 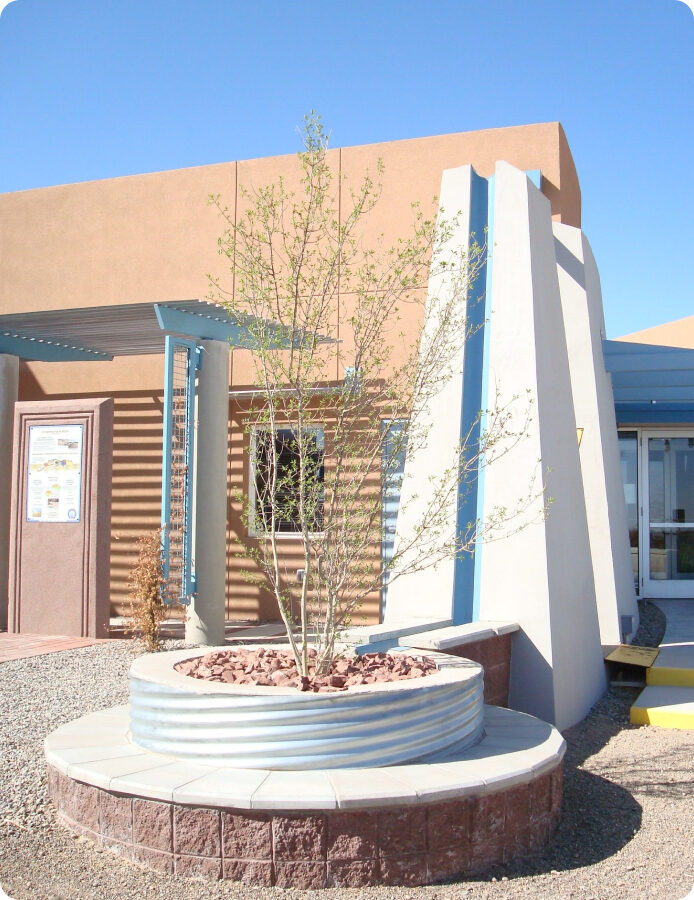 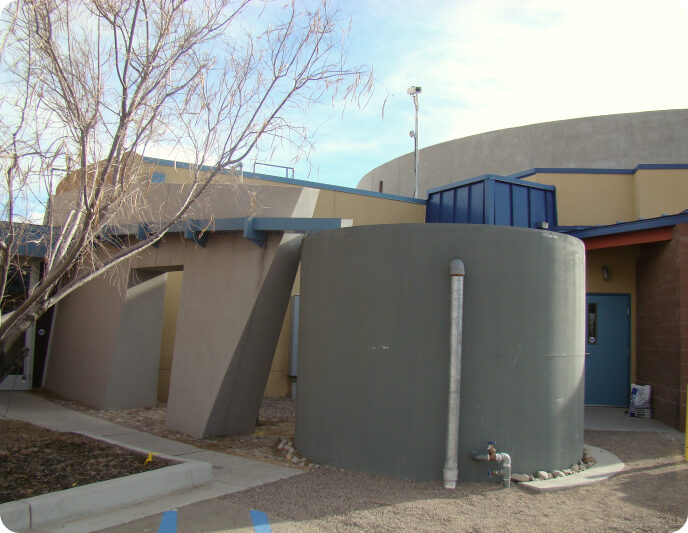 In moving from concept to execution, the project leaders never lost sight of their original vision. The final plan retains the strength and harmony of the original vision. Contour lines sketched onto the plan show how the structure flows with the topography of the site. The design thus integrates the building both with its site and with the mission of the organization that inhabits it.

The completed structure comprises 4,700 square feet and adheres to strict energy performance, water conservation and architectural goals. Many of the systems incorporated in the building were selected and designed for a life cycle cost payback of less than twenty years. The building incorporates natural daylighting concepts, recycled and nontoxic materials, motion and light sensors tied into the lighting system, a highly insulated building shell, and economizers fitted on the air handling units. We describe both the principles of performance and conservation embodied in the SSCAFCA building and the techniques used to express them.

When it came to building our headquarters, SSCAFCA went back to our mission to define the principles we would adhere to. We wanted to create an appealing and versatile headquarters that would set an example of quality, integrity, leadership and professionalism in the design, construction and management of the facility. We laid out some basic assumptions:

No other public building in the state uses as many sustainable features within the building or incorporates such efficient water harvesting in the design. The building was located high on the site in order to maintain the natural site drainage. The landscaping and parking areas were designed to incorporate and demonstrate wise water stewardship as well as runoff control for land stewardship.

Architects Environmental Dynamics analyzed the relationship between water retention systems used by SSCAFCA and the site’s own natural arroyo systems to develop a design concept integrating the project with the surrounding ecosystem. Permeable paving in a portion of the parking lot helps reduce runoff and returns water to the ground. Inside the building, wise fixture choices reduce potable water consumption by approximately 20% over conventional standards. 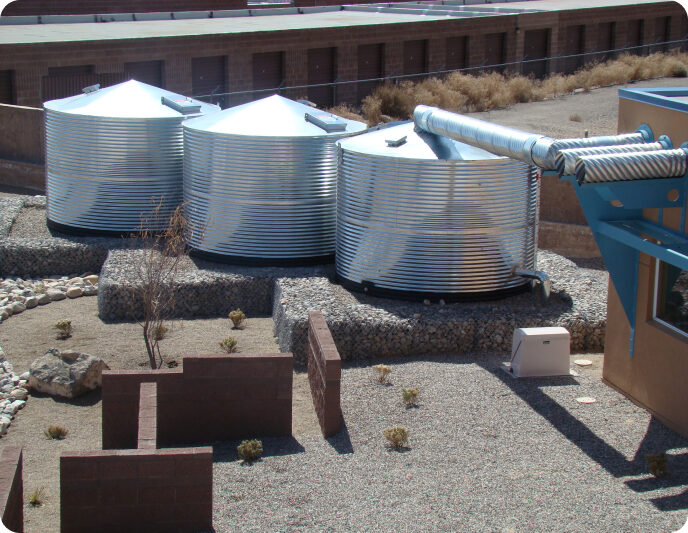 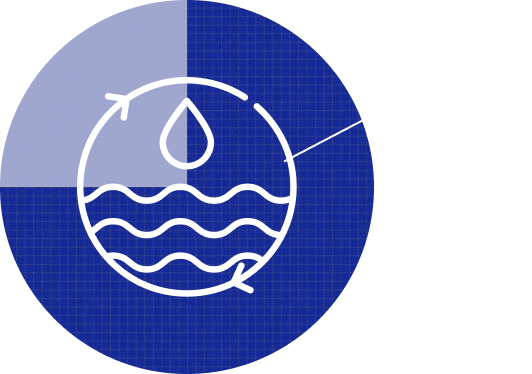 About 75% of the water from the building’s roof is directed into a 4,800 gallon cistern for later reuse in landscape areas. Water runoff from the building not captured in the cistern is directed through the landscaping in order to reduce the storm retention system. These practical features were implemented with a touch of whimsy to make them visually appealing. The mix of colors, shapes and textures echoes the natural setting to convey a sense of harmony.

Designing for economy and resource conservation doesn’t mean sacrificing comfort. SSCAFCA wanted a warm and welcoming feeling for staff who spend a large part of their waking hours in the building as well as other stakeholders who may spend long or short amounts of time in the building. The new facility was designed to have minimal impact on the land while enhancing and maintaining the natural ecosystem. The building and site features were tightly consolidated to leave as much habitat as possible for the birds and animals which frequent the site.

When it came to the inside of the building, one of the most important considerations in the design was to create a healthy work environment with a strong visual and physical connection to the exterior. Indoor air quality is improved through operable windows, low or no-VOC materials for interior finishes, non-toxic paint over non-toxic substrates in all cabinetry and non-toxic floor coverings in all offices. Ample natural light, the use of durable surfacing materials and rigorously energy-efficient design have sharply cut maintenance and utility costs for the building. Moreover, studies have shown that incorporating eco-friendly features into the work environment reduces absenteeism and employee turn-over and increases employee health and satisfaction.