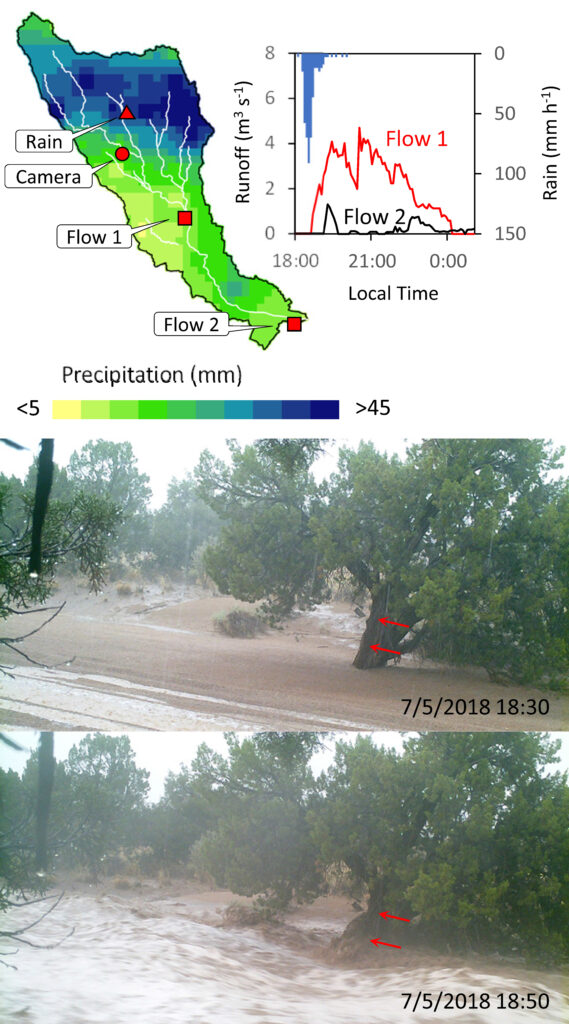 This study evaluated the impacts of urbanization and stormwater infrastructure on ephemeral channel transmission loss (TL), an important source of groundwater recharge in dryland basins. A hydrologic model (HEC-HMS) was built for the watershed and calibrated based on seven years of precipitation and discharge data. The model was then used to simulate the individual and combined impacts of land use change (urbanization) and stormwater infrastructure (ponds, channel lining) on runoff and transmission losses over a ten-year period based on observed storm events. Results show high inter-annual runoff variability with the two wettest years contributing 44–59% of the 10-year total, and dry years resulting in nearly no flow. Both runoff and TL increased with urbanization. Assuming natural ephemeral channels, TL comprised 64–81% of runoff reaching the basin outlet and 7–10% of domestic water use in the basin, depending on urbanization scenario. Stormwater detention ponds had minimal impact on TL; however, lining the lower 5, 10 and 15 km of ephemeral streams reduced TL by 31%, 55% and 73% over the ten-year study period. Results indicate that preservation of ephemeral channels, in particular permeable channel beds, should be considered a viable strategy for managed aquifer recharge in urbanizing areas.

Comparison of seven simple loss models for runoff prediction at the plot, hillslope and catchment scale in the semiarid southwestern U.S. 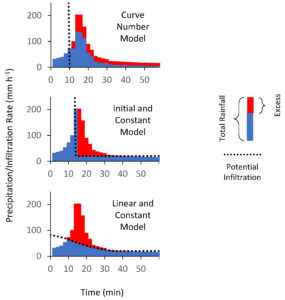 Infiltration excess overland flow is the dominant mechanism for runoff generation in many dryland watersheds. Event-based rainfall-runoff models therefore partition precipitation into two components: loss and excess precipitation. The latter is then transformed into a runoff hydrograph. Numerous loss models have been developed over the past century ranging from simple empirical to sophisticated physically based methods. Complex models can lead to equifinality and associated uncertainty at larger spatial scales with varying soil and cover conditions. Simple models are therefore widely used in hydrologic practice. In the absence of measured data in many arid and semiarid regions, model parameters are often estimated based on laboratory or field infiltrometer tests. Given the documented importance of spatial scale on the runoff response in dryland catchments, it is not clear how models parameterized at the point or soil column scale will perform at the hillslope or catchment scale under real-world conditions. In this study, we compared the performance of seven simple loss models with three or less parameters: the Philip, Smith-Parlange, Horton, Kostiakov, curve number (CN), initial and constant (IC) and the linear and constant (LC) models. The latter is a modification of the IC model introduced in this study. We estimated parameters at the plot scale (2.8 m2) using rainfall simulation and then tested model performance at the hillslope (1.5–3.7 ha) and catchment scale (2.4–2.8 km2) based on measured rainfall-runoff data at two sites in New Mexico and Arizona, U.S. Results show that rainfall simulation can be used successfully to parameterize loss models at the hillslope scale. At the catchment scale, most models showed positive bias, suggesting that other losses (such as channel or transmission losses) play an important role in determining the catchment runoff response. Rainfall intensity and temporal distribution were found to be crucial for accurate runoff prediction. Models that are sensitive to rainfall intensity during the entire simulation (Philip, Smith-Parlange, Horton, Kostiakov, LC) therefore performed better than those with an initial abstraction term (CN, IC). During intermittent rain, the best results were achieved by methods expressing infiltration capacity as a function of cumulative infiltration (LC, Smith-Parlange). 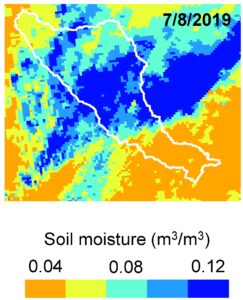 Knowledge about soil moisture is important for event-based rainfall-runoff models but monitoring conditions at the catchment scale is not a trivial task. Soil moisture is highly variable in space and time, particularly in dry climates with seasonal and spatially heterogeneous rainfall. Point measurements are difficult to upscale, and remotely sensed (RS) data often lack in spatial or temporal resolution for local or regional studies. Longer latency periods – the time required before data becomes available – of some RS data make them less applicable to time-sensitive analyses such as flash flood forecasting. This study evaluated a novel approach for estimating catchment-scale volumetric soil moisture using an antecedent precipitation index (API) -based model. The model was trained and tested using in-situ soil moisture measurements collected during a 3-month field sampling campaign in a 142 km2 study area in central New Mexico. The calibrated model was applied at the catchment scale to produce soil moisture grids from radar-derived rainfall estimates. Model performance, resolution and latency were compared to satellite-based soil moisture estimates. Benefits of the proposed new method include high spatial resolution (1 × 1 km or less depending on the precipitation data source) and high prediction accuracy (root mean square errors 0.014–0.018 m3/m3). Given the short latency period for radar-derived rainfall data, the method has potential for use in operational flood risk assessment and forecasting.

Impact of antecedent soil moisture on runoff from a semiarid catchment 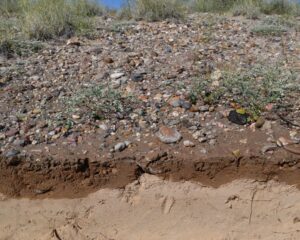 Antecedent soil moisture is an important factor in the generation of runoff, but guidance for modeling moisture conditions in semiarid catchments is limited and conflicting. In this study, the impact of antecedent moisture was assessed at the plot scale (2.8 m2) using a portable rainfall simulator, and at the catchment scale based on observed precipitation and discharge for a 2.8 km2 watershed in central New Mexico. Performance of three loss models commonly used for hydrologic analysis in the southwestern U.S. was tested at both scales. High initial moisture content led to substantially higher runoff ratios at both scales, confirming the importance of antecedent soil moisture for runoff predictions in semiarid drainages. Hydrologic parameters estimated based on plot experiments, however, were highly variable and cannot easily be upscaled to the catchment scale. Loss model performance was clearly scale dependent: more simplistic (one- and two parameter) loss methods out-performed a more complex (four parameter) model at the watershed scale, while the opposite held true for test plot simulations. At the catchment scale, all models performed poorly for small runoff events, but yielded acceptable results for storms causing large discharges if antecedent soil moisture was considered. Failing to account for antecedent moisture led to simulated runoff volume errors up to one order of magnitude.

Streamflow information is collected worldwide and used in the areas of engineering design, water supply planning, and hydrologic and water quality analysis, among others. Available data from intermittent and ephemeral streams in arid regions are sparse because streamflow is highly variable and infrequent. Due to a lower perceived priority to monitor intermittent and ephemeral streams, it is more difficult to justify the economic expense of traditional monitoring equipment. This study demonstrates that time-lapse photography can provide a viable, low-cost, low-tech option for measuring stage (water depth) at stream gauging stations. A time-lapse camera was set up to record images of a channel and staff gauge in an ephemeral urban catchment in central New Mexico. During flow events, stage can be read from the time-lapse images and converted to a discharge time series. In the course of a 2-year test period, 33 runoff events were recorded. With approximately $200 in materials, this method costs only a fraction of conventional gauging stations.

A copy of the peer reviewed, accepted manuscript is available here.

Urban runoff in the U.S. southwest: Importance of impervious surfaces for small-storm hydrology 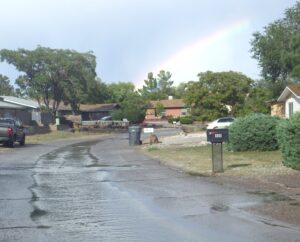 Impervious surfaces have long been recognized as one of the critical factors influencing the rainfall-runoff relationship in urban areas. Published guidance on how to treat urban imperviousness in hydrologic simulations varies, and few studies exist for the southwestern United States. In recent years, small-storm hydrology has become increasingly important to support water quality evaluations. Methods developed for large, infrequent storms are often applied to simulate runoff from smaller rain events, with questionable results. To test the impact of imperviousness on small-storm runoff, impervious cover in a 1.5-km2 urban basin in central New Mexico was mapped and differentiated into directly connected impervious areas (DCIAs) and unconnected impervious areas (UIAs) that are separated from the drainage system by a pervious buffer. Measured runoff from 25 small-magnitude storms was compared to model scenarios with varying treatment of imperviousness. Simulation results revealed that during small rain events, all runoff originated from DCIAs, while UIAs contributed no flow. For this particular basin with 28% DCIAs and 16% UIAs, losses from UIAs approached a constant value of approximately 4 mm. Findings were applied to a 142-km2 watershed to assess model performance for larger storms. The impact of losses from UIAs on the runoff response decreased with increasing storm magnitude. This study presents a modeling approach for DCIAs and UIAs that increased accuracy for small runoff events in urban areas without negatively affecting model performance for larger storms. Use of this method can improve model predictions, particularly when hydrologic simulations built with flood control in mind are used to assess the impact of more frequent storm events.

You can access a copy of the peer reviewed manuscript here. 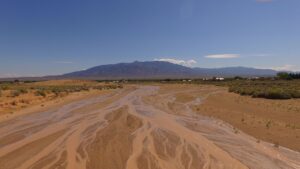 Under natural conditions, stormwater runoff in much of the semiarid Southwest drains through a network of unlined stream channels called arroyos. Dry during most of the year, arroyos are transformed into raging rivers for short periods of time following intense rain events. As stormwater travels downstream, a portion of the flow is lost to the highly permeable arroyo bed. The purpose of this study was to quantify these so-called transmission losses for a 13-km reach of one New Mexico arroyo. Infiltration rates were tested in the field using a double-ring infiltrometer. Test results varied considerably from 3.0 to 19.6 cm/h, with a median rate of 9.4 cm/h. Additionally, three stream-gauging stations were installed along the arroyo; for two storms in 2015, they measured a dramatic decrease in peak discharge (91 and 84%, respectively) and runoff volume (90 and 80%, respectively). Gauge data was used to successfully simulate transmission losses in a hydrologic model of the drainage system; the average loss rate for the arroyo was found to be 3.8 cm/h. On average, infiltrometer results overestimated reach-scale loss rates by 60%.

You can access a copy of the peer reviewed manuscript here.

Green stormwater infrastructure (GSI) offers many benefits, including improved water quality, healthier tree canopy, recreation, and habitat.  However, because the contemporary practice of GSI  was developed in temperate areas, it is not yet as widely understood nor practiced in most arid and semi-arid climates.  This research clarifies the relevance and legality of GSI in the Middle Rio Grande Valley, and synthesizes practices from GSI/LID guides from semi-arid places in the U.S. Recommended practices are then applied to a demonstration site at Central New Mexico Community College.  A copy of Tess’ thesis can be viewed here.